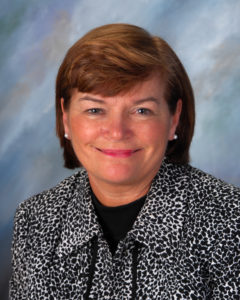 “This is the utopia of nursing,” Mary Murphy remembers saying when the Ohio’s Hospice of Dayton care center first opened. “It’s still the utopia of nursing,” she said with a smile. Mary speaks quickly but not rushed, a necessity for a chief nursing officer responsible for a large staff. She is energetic, unassuming, and very approachable. The fast pace and challenges keep her moving, especially with the difficulties associated with providing hospice care. “I try to plan fifty percent of my day. Most of it is taken up with meetings.” The remainder of her time is likely to be spent checking on her staff and rounding in the hospice house. Spend just a little bit of time with her and it is evident that Mary Murphy is a driven nursing administrator who believes that hard work and education are two of the most important keys to success.

Success did not come easily for Marys’ family. They left their home in Europe shortly after World War II ended and arrived at Ellis Island in 1950. Marys’ father was not sure if they would stay in this country and he didn’t want the family to forget their native tongue. “My father had us read a German newspaper every night and I didn’t start speaking English until I was 5 years old.” Her parents preached hard work and education throughout her childhood. Mary would go to school and spend most of her time studying. She was a teenager when her father became ill and Mary began spending time with him at the hospital. “I remember being fascinated at the hospital, watching the doctors and nurses performing their tasks. Back then everything was glass and metal so it was noisy and procedures took quite a long time to perform.” Marys’ father succumbed to pancreatic cancer. Shortly thereafter, she began her nursing education.

Mary attended the Claude V. Courter School of Practical Nursing in Cincinnati, Ohio in 1969. Her first position after graduation was at Bethesda Hospital as a Licensed Practical Nurse working the OB/GYN department. She quickly learned two key things about the job and about herself. First of all, “nursing isn’t like other jobs,” she said. “I thought I would just go to work and then go home, like someone with a bank job. Nursing isn’t like that though, I found myself still thinking about patients even after I got home.” The second thing she learned was that OB wasn’t for her. “You need to find your passion early in your career. When you find it keep educating yourself about it. There are always new things to learn.” Mary moved on to the Oncology Unit at Miami Valley Hospital in Dayton, Ohio. She found her passion providing care to patients battling cancer.

“Cancer patients are truly the nicest patients,” she remarked. “I would always get patients asking me how I was doing. Imagine that, all they are going through and still concerned about me.” Mary spent the next two decades caring for these patients and continuing her education.

Mary obtained her Registered Nursing License after graduating from Sinclair Community College. She remained in Oncology as a Primary Nurse and started pursuit of a BSN at Miami University. During that time changes in medications and procedures helped ease the pain of cancer patients. “The methods to control suffering became much better. People didn’t have to lie in bed writhing in pain for long periods of time like they used to.” Marys’ skill in helping to alleviate the agony of her patients and her continuing education led to her becoming the Ostomy/Pain Resource Nurse at the hospital. Her belief that “there are always new things to learn” brought her next to the challenge of the Master of Science in Nursing program at Wright State University.

“It is very hard working and going to school. You have to think of nursing as a profession and continue educating yourself despite the difficulties.” Mary graduated from Wright State University in 1989 and moved into supervision at Miami Valley. “Nursing is very physically demanding and you can’t go on providing patient care forever,” she said with a laugh.

The supervision and management field of nursing presented new challenges for Mary. These challenges led to a departure from Miami Valley and began the next phase in her career. “The difficulty at the hospital was getting the different departments to work together. Everyone operated in their own silo with little collaboration. In my opinion, the interdisciplinary team approach works the best. All the departments, nursing, dietary, pharmacy, spiritual, bereavement, and the doctors collaborating on the plan of care is ideal. That is what we have here at Hospice of Dayton.”

Ohio’s Hospice of Dayton operates from a seventeen acre piece of land on Wilmington Avenue. Mary Murphy is the Chief Nursing and Care Officer. “This campus and building are just beautiful,” she reminds herself daily. There are gardens and a pond, fresh flowers throughout, the glass partitions have ornamental grass between the panes and birch trees line the hallways. It is serene and comfortable just like it was designed to be, “the utopia of nursing.” The teamwork is evident and it works well but challenges do remain.

“The patients being referred to hospice care are much sicker now and with a variety of illness. When we first started about 95% were cancer patients and now that number is 35%. We have to have more experts from other fields, like cardiology and pulmonology. When hiring someone from another field I look for someone who is passionate, flexible, a team player, and has a sense of humor. This is a challenging part of nursing and laughter sometimes really is the best medicine.”

“There are so many opportunities in the nursing field you can find your passion. Find your passion and then look at the career path,” is her advice for new nurses. “Once you have found that passion it’s time for the hard work and education to keep moving along that career path.” Mary Murphy’s drive, hard work, and education were two of the most important keys to her success.