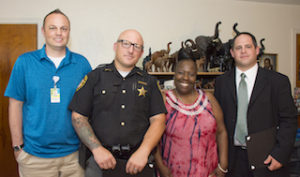 Two years ago, 32-year old Antwan Hurston celebrated a warm summer day on July 5 with friends at the Stillwater Parks Apartment pool. He nearly lost his life that day. This year, his mother wanted to make a point of thanking those who saved him on the anniversary of the accident that almost took his life.

Sharon Hart is grateful for the heroic work of Montgomery County Sheriff’s deputies who jumped into the pool to rescue her son. They were able to pull Antwan from the bottom of the pool and perform CPR until the Harrison Twp. Fire Department arrived and took over. Antwan was rushed to Miami Valley Hospital in critical condition. He survived but has remained incapacitated and is now in the care of Ohio’s Hospice affiliate Ohio’s Hospice of Dayton. His mother is grateful for every one of the days she has been able to have her son with her this past year. To let the officers involved know how appreciative she is, she invited them to her home so she could present them with certificates of appreciation.

It was the first time Sharon got to meet Montgomery County Sheriff’s Deputies Brian Shiverdecker and Kyle Baranyi.  “I cannot express to you how much my son means to me and how much I appreciate the efforts each of you took on that day,” Hart told the officers. “I hope this little bit of truly heartfelt recognition will demonstrate the effect that your heroic actions had for us… My family, as well as this community, are privileged to have your hard work and dedication looking out for us every day on your job.”

The two officers admitted that it’s rare to know what happens after they respond to a call.

The deputies said it’s rare to know what happens after they respond to a call. They said they were just doing their job.

“We just gave mom what she wanted,” said Deputy Shiverdecker. “And that’s her kid home.”

Sharon has provided care for her son in her home for the past year with home health, and now hospice, support. She says she is grateful every day for the heroes who saved her son’s life.”I just thank God every day, you know, that I wake up and he wakes up. And, as long as he’s here I”m happy,” said Hart.