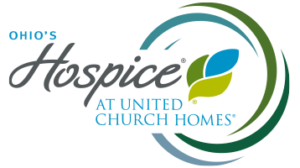 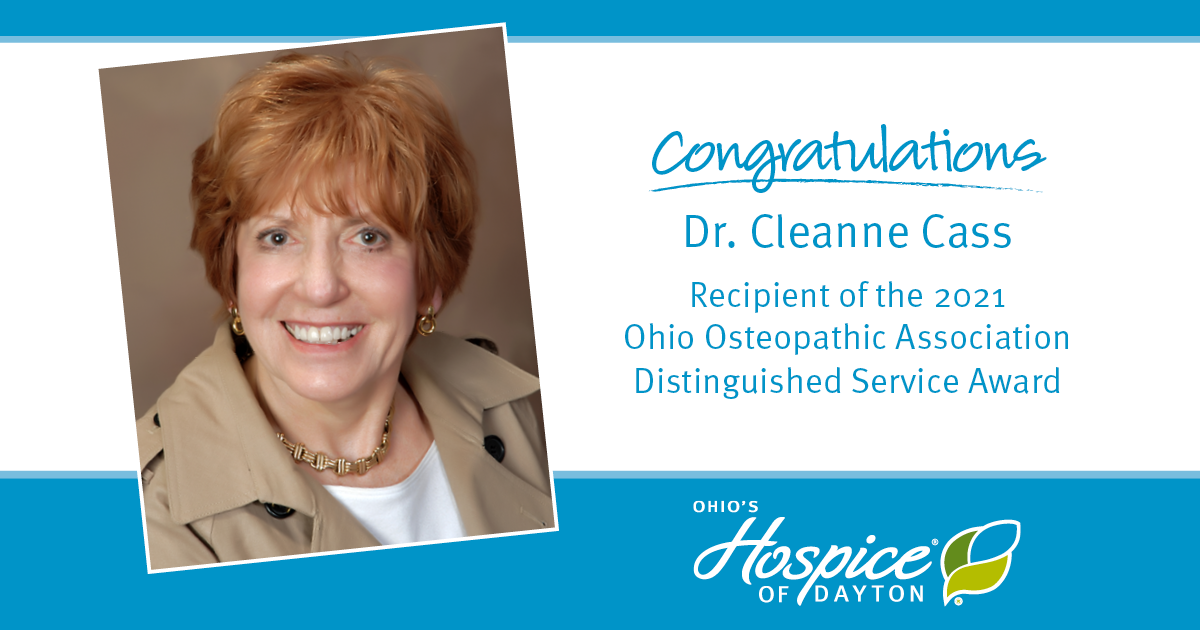 “I was very honored to receive the Distinguished Service Award. It was beyond my wildest dreams, and I am very humbled,” said Dr. Cass, director of community services and physician education at Ohio’s Hospice of Dayton and director of the hospice and palliative medicine fellowship. “Ohio’s Hospice made it possible for me to participate in every opportunity I have had and motivates me to protect the rights of hospice patients and physicians.”

The Distinguished Service Award is the highest honor from the Ohio Osteopathic Association, given to an osteopathic physician each year who has shown outstanding accomplishments in personal, scientific, and professional affairs, especially in service to the osteopathic profession in Ohio.

Dr. Cass was awarded for her advocacy of end-of-life care in the state of Ohio, for her passion for introducing hospice and palliative care education to colleagues, and for her dedicated front-line service at Ohio’s Hospice of Dayton.

During the recognition ceremony, Dr. Henry Wehrum, president of the Ohio Osteopathic Association, recognized Dr. Cass for her expertise.

“Dr. Cass demonstrates excellence through her expertise and extraordinary compassionate support for her patients and families,” Dr. Wehrum said. “An outstanding role model in hospice and the broader healthcare community, she goes above and beyond for her patients.”

Dr. Cass started her career before hospice became prominent in the United States and was a founding member and the first medical director of Mercy Hospice in Springfield, Ohio, now known as Ohio’s Community Mercy Hospice, a service of Ohio’s Hospice of Dayton.

“At the time, there was no DNR legislation in Ohio and hospice patients were at risk of having CPR performed if paramedics came to their homes when they were dying,” Dr. Cass said. “Our hospice provided leadership to have the Ohio DNR law passed. Ohio was one of only seven states to do so at the time.”

She also has served on the Ohio Governor’s Opioid Task Force where she developed recommendations for legislation on safe opioid prescribing.

Recent Posts
Contact Info:
7575 Paragon Rd.
Dayton, Ohio 45459
937.256.4490 • 1.800.653.4490
Now serving 44 Ohio counties. To find a location near you, visit our location page.
Locations Near You
To contact Ohio's Hospice call us toll free at 1-800-653-4490 or 937-256-4490 or you can write us at 7575 Paragon Rd., Dayton, OH 45459
Copyright © 2021 Ohio's Hospice, Inc. The Ohio's Hospice logo is a registered trademark of Ohio's Hospice, Inc. All rights reserved.
Back To Top
We use cookies on our website to give you the most relevant experience by remembering your preferences and repeat visits. By clicking “Accept All”, you consent to the use of ALL the cookies. However, you may visit "Cookie Settings" to provide a controlled consent.
Cookie SettingsCookie PolicyAccept All Cookies
Manage consent