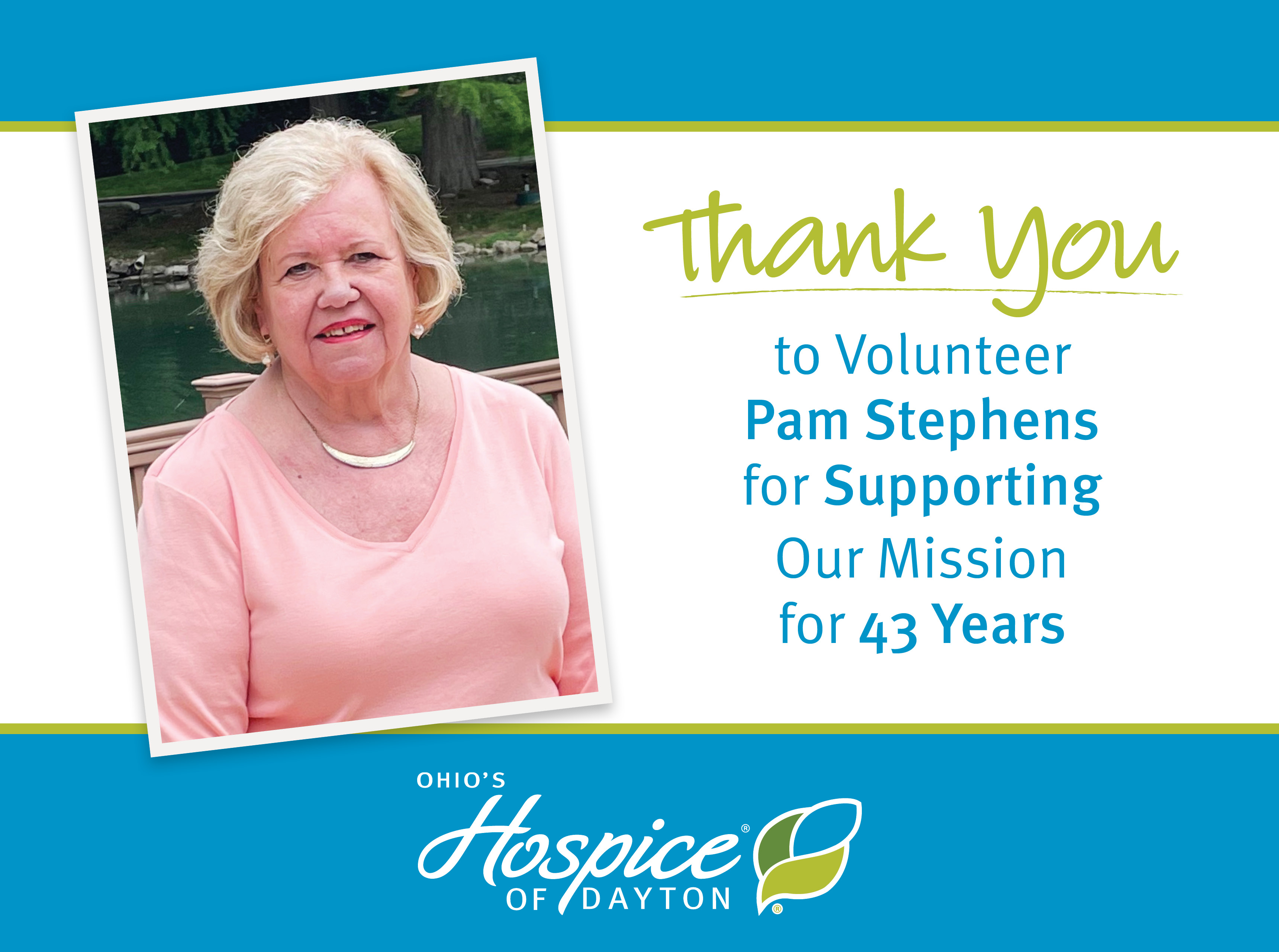 When the phone rang one day in 1979 asking her to become a board member and help with publicity for Hospice of Dayton, Pam Stephens immediately answered yes. Since then, she has been serving patients and families with kindness and compassion for 43 years.

Stephens reminisced on two exciting moments during her time as a volunteer, naming the building of the Founder’s Building at the Hospice House in Dayton and Medicare and Medicaid adding hospice care as a benefit to its beneficiaries as the top moments.

“When Medicare and Medicaid became available for hospice care, that’s what really allowed hospice to become more than a few nurses on the hospital floors,” Stephens said. “ We saw the interest grow in the community, and we started growing rapidly from there.”

Stephens served on the Ohio’s Hospice of Dayton board for 20 years. In addition, she has been involved in the Teddy Bear Project, starting at the St. Elizabeth Hospital inpatient unit, to provide warm, fuzzy teddy bears for hospice patients. The teddy bears are provided by the Dayton LaSertoma Club.

During her time with Ohio’s Hospice of Dayton, Stephens has watched the organization grow and reach the community in new ways each year.

Stephens graduated from the University of Cincinnati with a degree in radio and television broadcasting in 1964 and returned to Dayton to work for Channel 22 before it went on air as an assistant in the traffic department where she scheduled public service announcements and reported on the weather. From Channel 22, she went to Ohio Bell where she worked as a service representative.

After having her two kids, Stephens started teaching public speaking and communications courses at Sinclair Community College and began working at her husband’s insurance agency as he opened the business.

In addition to her service to Ohio’s Hospice of Dayton, Stephens is the chair of the foundation at her church and a member of the Dayton LaSertoma Club.

Ohio’s Hospice of Dayton is thankful for Pam’s dedication to the mission. To learn more about volunteering, please visit: https://www.hospiceofdayton.org/volunteers/

Ohio’s Hospice of Dayton, an affiliate of Ohio’s Hospice, is a not-for-profit hospice provider. Since 1978, it has served patients and families in the Dayton region in their homes, extended care and assisted living facilities, and the Hospice House location in Dayton. Grief support services are available to the entire community through the Pathways of Hope Grief Counseling Center. Ohio’s Hospice of Dayton serves more than 1,000 patients and families daily, achieving national recognition for innovative services and outstanding care.