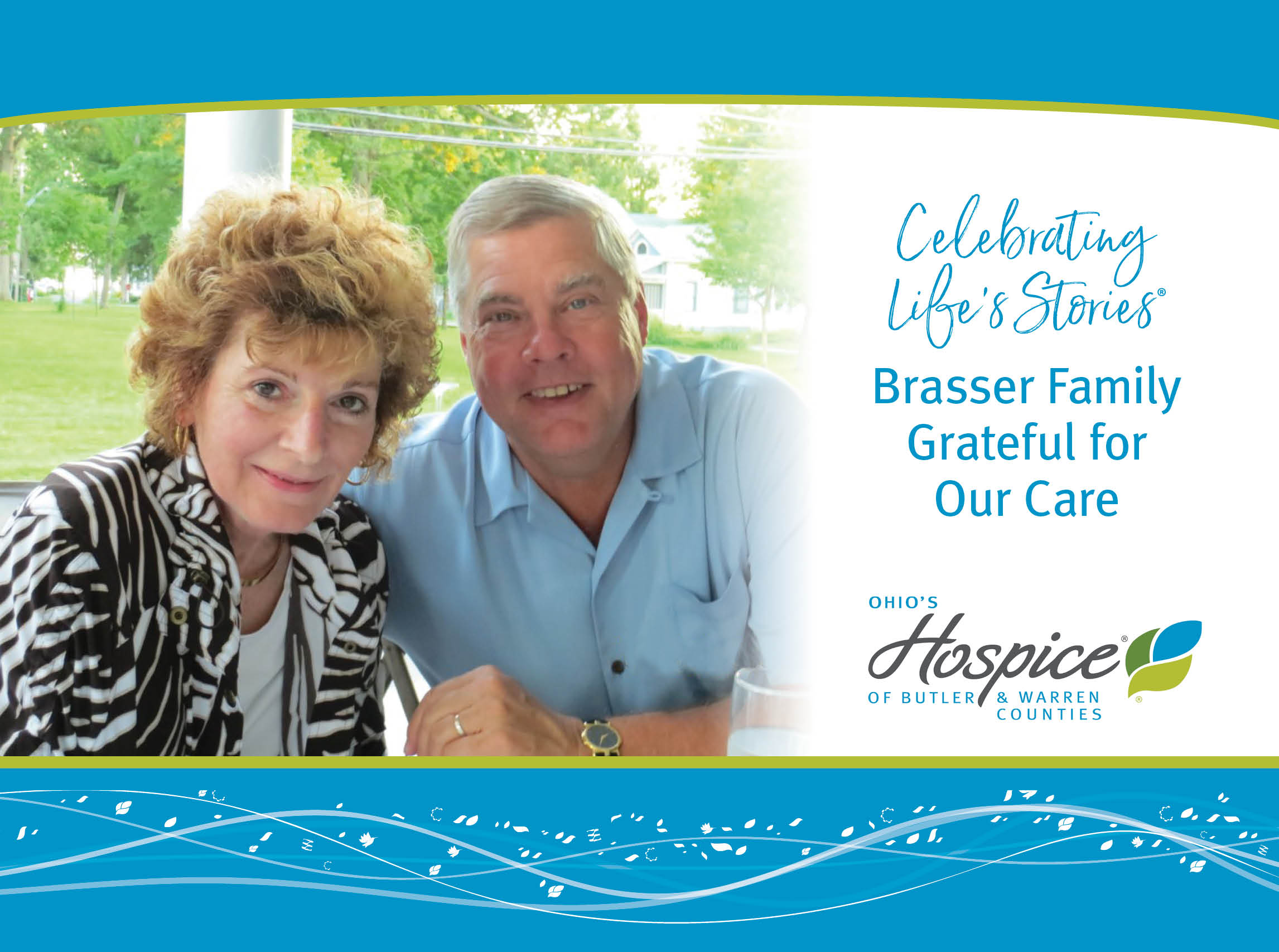 Bob Brasser, his family, and their close friends have been amazed at his wife Jean’s perseverance and will to live despite battling multiple sclerosis (MS) and chronic obstructive pulmonary disease (COPD). He credits the care team at Ohio’s Hospice of Butler & Warren Counties with enhancing Jean’s quality of life and helping her to extend it.

“Jean’s journey of perseverance and will to live has been amazing and inspirational to watch,” Bob said. “We never thought Jean would see 2022. The support of the care team has contributed significantly to the length and quality of Jean’s life.”

Originally diagnosed with MS in 1992 when their sons were young children, Jean was able to manage the disease while working and raising a family. She was an account executive with Hallmark before her sons were born. She became a mortgage broker and worked in that field for 20 years. Bob credits Jean with encouraging their sons to persevere in their efforts to earn their Eagle Scout rank, the highest advancement rank in Boy Scouts.

The family spent several years in Columbus, Ohio, before they moved to Centerville, Ohio, where they raised their sons. After living in Centerville for 25 years, Jean learned about a home on a golf course in Springboro, Ohio. They fell in love with the home, and they have enjoyed their golf friends and their neighbors.

But in recent years, Jean’s condition worsened. She was referred to Valerie Houseknecht, MD, a collaborative psychiatrist with Pure Healthcare. Jean began meeting with Dr. Houseknecht in October 2018. When Jean became a hospice patient, Dr. Houseknecht continued to meet with her. “Clearly, Jean’s mental health and willingness to live are attributable to Dr. Houseknecht’s care and understanding,” Bob said.

He also praised Debbie Reardon, RN care manager with Ohio’s Hospice of Butler & Warren Counties, for her role in Jean’s care. “What an amazing nurse and caregiver she is. Her patience, understanding, listening ability, and sense of humor bring a smile to Jean and me,” Bob said. “Debbie’s weekly visits are something Jean looks forward to each week.”

He also expressed appreciation for Tom Myers, chaplain with Ohio’s Hospice of Butler & Warren Counties. Bob and Jean describe Tom as an excellent listener who provides great counsel on some difficult subjects. “Our conversations are both emotional and thought provoking,” Bob said. “He has helped us come to grips with where this disease is eventually headed, and we’re at peace with that.”

They are also grateful for the other members of the care team: Amy Green, massage therapist; Bob Westendorf, respiratory therapist; and Rhonda Konicki, APRN hospice and palliative care.

“Amy visits us twice a month. This is a creative way to provide innovative care,” Bob said. “In addition to his respiratory therapy skills, Bob is a supportive and motivational coach. Rhonda is extremely patient and will spend whatever time necessary to provide Jean’s care. She and Debbie make a great nursing team.”

As Jean’s primary caregiver, Bob does whatever he can to make Jean more comfortable. Their special time of the day is in the morning when he gets Jean ready for the day. She appreciates his help. She talks about his “sexy blue eyes” because they remind her of singer and actor Frank Sinatra.

“When I took my wedding vows, I took them seriously,” Bob said. “I attribute that to my mom and dad. My dad used to dote on my mom. He was a good example.”

In July 1980, they met on the CB radio as they were driving separately to New York City. Both were from New York state, but they were living in Ohio. Jean lived in Dayton, and Bob lived in Columbus. At that time, the speed limit was 55 miles per hour. Jean noticed that Bob had a radar detector. So, she followed him. He noticed Jean following him and saw that she had a CB radio antenna. He tried to get her attention on the CB radio, but she ignored him.

In Pennsylvania, they stopped for gas and introduced themselves. Later, they stopped for a dinner and a drink in New Jersey. Jean gave him her phone number, and he called her when they both returned to Ohio. A little more than a year later, they married in December 1981.

We’re honored and privileged to provide care to Jean and her family.