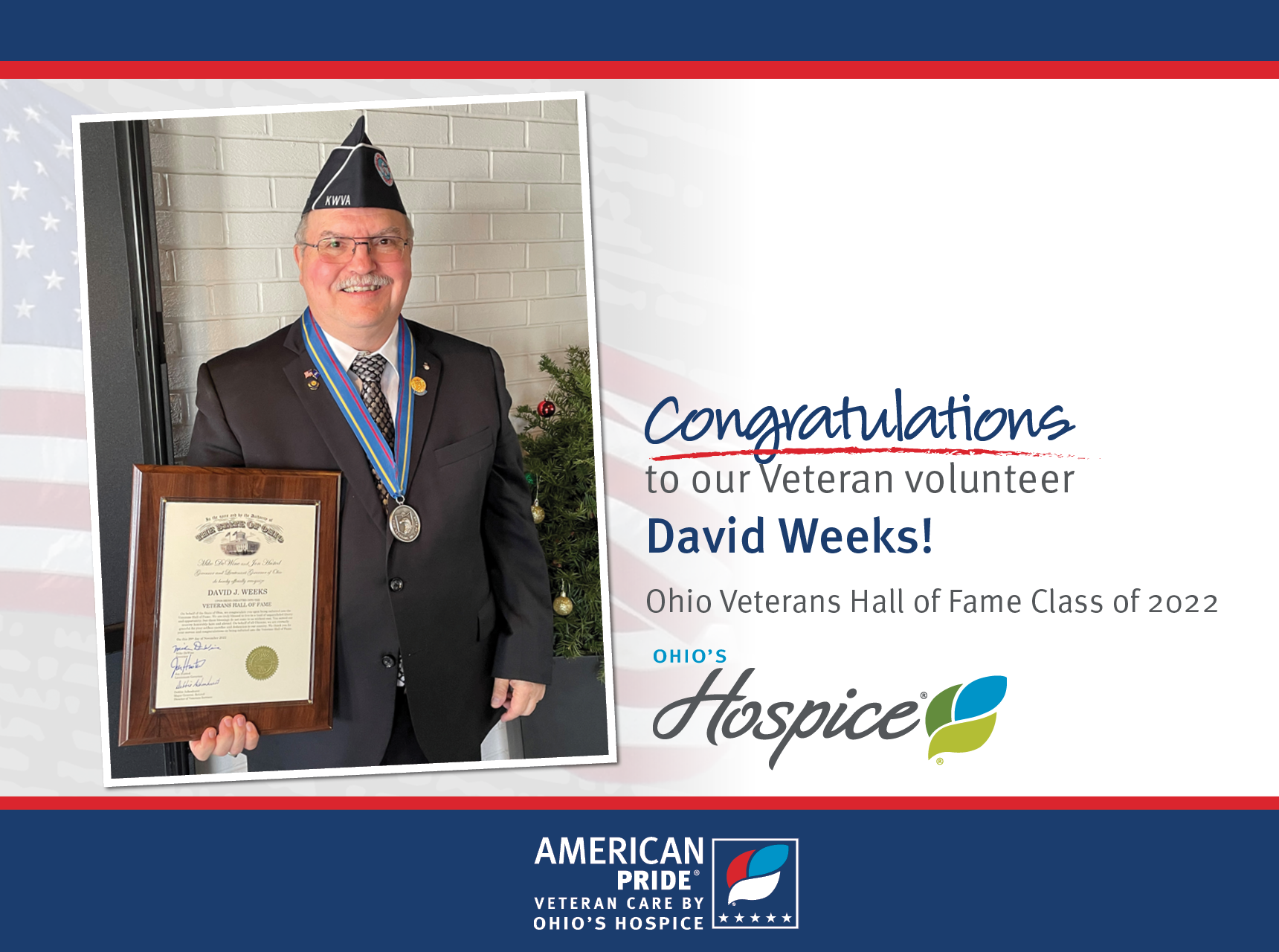 Ohio’s Hospice of Dayton volunteer and United States Air Force Veteran David Weeks was recently inducted into the 2022 Ohio Veterans Hall of Fame for his commitment to serving his community. The induction ceremony was held on Nov. 29 at Fawcett Center in Columbus, Ohio.

“I felt honored, and humbled. I’m not one to look for attention and recognition, but it is nice to be recognized for what you do for people who cannot speak for themselves,” Weeks said. “I had to walk away from my second career because of medical disabilities from the military, and that’s when I found my calling in volunteering with hospice.”

The Ohio Veterans Hall of Fame was created in 1992 to recognize the accomplishments of Veterans who served honorably in the military and continue to serve their communities through volunteerism, advocacy, professional distinction, public service, and philanthropy. Each year, the Hall of Fame Executive Committee reviews nominations and selects 20 candidates.

During his military career, Weeks served in the United States Air Force. He is a Desert Storm Veteran and a highly decorated Veteran. He completed his first master’s degree while serving and retired as a First Sergeant after 20 years. However, after retirement from the military, he began a second career in the automotive industry. He had a very successful career, and he finished a second master’s degree in engineering. He ended his career as an executive director.

“I began volunteering while in the Air Force in 1977,” Weeks said. “My first love was working with the disabled children through the Special Olympics. Throughout my career, I played Santa for several years.”

He became a director of the Big Brothers Association, worked with orphanages in South Korea, and was involved in every assignment in some volunteer capacity. During his last assignment in Florida, he began with four members of his unit working with the County Council of Aging with yard work, painting rooms, houses, and other needs. When he left after 13 months, the team grew to 200 volunteers.

“We assisted several elderly adults with cleanup from two significant hurricanes within a two-month period,” he said. “At my retirement, my commander awarded me the first Air Force Medal for Volunteerism. Earlier in the year, this award was approved by the Air Force, but he would not let anyone on base receive the medal until I received mine.”

Now, Weeks volunteers with Ohio’s Hospice of Dayton to support Veteran patients and their families.

“One of the best things is seeing the Veterans react to another Veteran who has been there and can relate to them,” Weeks said. “Sometimes you sit there and talk to a Veteran, and they will share things that they have never told their families. You must be invested in the Veteran and do it with the utmost passion and sincerity.”

Weeks honors Veteran patients at home and in the Hospice House through the American Pride® Veteran Care by Ohio’s Hospice program, which honors the service of Veteran patients and assists them in obtaining access to all the benefits to which Veterans are eligible.

“Every Veteran patient that served in the military is given the opportunity to have a Veteran recognition ceremony if they want one,” said Kelly Linder, volunteer coordinator at Ohio’s Hospice of Dayton. “Our volunteers like David schedule and complete those ceremonies with the families to celebrate and thank Veterans for their service.”

Weeks also has served as an executive board member for the Ohio Disabled American Veterans (DAV) organization and is still serving after eight years as commander of the Disabled American Veterans in the Dayton Area. He has led several fundraising efforts for the Dayton VA Medical Center and the DAV Transportation Network. He works with the Veterans Affairs Mission Daybreak Program to reduce the veteran suicide rate. Weeks is an active member of the Greater Miami Veterans Community organization, Alzheimer’s Association, and St. Christopher Church, where he manages their Helping Hands program for parishioners and the local Vandalia community. He also volunteers with the St. Vincent de Paul Shelter. He is an active member and holds a key position with the Knights of Columbus. Weeks also was named “Knight of the Year” at the Knights of Columbus Annual State Convention for his commitment to serving others in his community.

Congratulations to David on his induction into the 2022 Ohio Veterans Hall of Fame and thanks to him for his support of our mission!