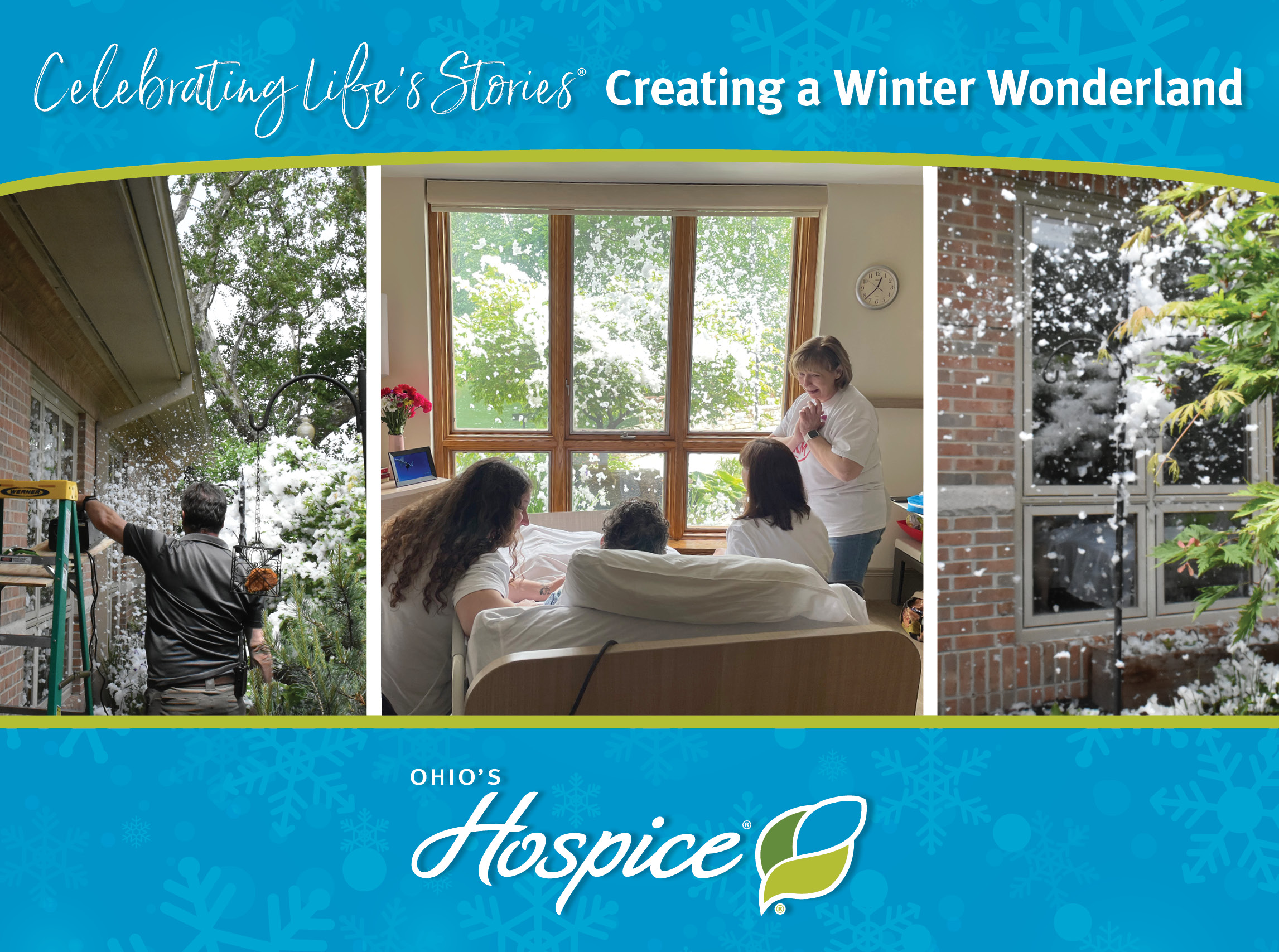 When Mark McNeal, facilities specialist at one of our Hospice Houses, arrived for his shift on a warm day this past May, the care team asked him to make it snow for a patient. The family of Kim Horton had asked the care team if they could help create this special moment for Kim.

They had the snow machine, but they needed someone who could learn how to operate it. So Mark quickly learned. The next day, he made it snow for more than 30 minutes, creating a winter wonderland on a warm, sunny day for Kim who loved snow and Christmas.

“I was more than blessed to help Kim’s family with this request,” Mark said. “ I saw how much joy the snow brought them.”

Inside her room, Kim was surrounded by her mother, Teressa Morse, her two sisters, Kelly Maroney and Stacy Raleigh, and her brother-in-law, Chester Raleigh. Kim’s mom and sisters wore their “I Love Kim” T-shirts. As the snow started to fall outside her window, Kim smiled, and a tear rolled down her face. Christmas songs played in the background as the snow continued to fall outside her room.

After it stopped snowing, Mark brought Kim, her mom and her sisters roses to remember the special moment they shared with one another.

Kim’s mother, Teressa Morse, explained that Kim suffered from alternating hemiplegia, a rare neurological disorder that develops in childhood and is marked by recurrent episodes of paralysis on one or both sides of the body, multiple limbs, or a single limb. She first noticed the disorder when Kim was 6 months old. Kim also suffered from epilepsy. Despite her medical condition, Kim persevered. She attended special education classes in school and graduated from high school.

“Kim is a unique individual. She has always lived at home,” Teressa said. “Kim is like a 3-year-old. We have had 39 years of Ho Ho Ho and Santa.”

In addition to her family, Kim loved the Christmas holiday, Santa, and everything related to snow. Books and music in her room reflected her love of the holiday.

Kim also gave Teressa strength and perseverance. “Kim is the one who has given me my voice,” she said. “As complicated as her life is, she has taught us to appreciate the simple things in life.”

During the past few years, Kim’s condition began to worsen. The alternating hemiplegia progressed into myoclonus, the twitching or jerking of a muscle or group of muscles. That progressed into a seizure. The only way to alleviate that was to induce Kim into a coma and intubate her. She experienced multiple visits to the hospital over the years.

When Kim was at home, Teressa had home health nurses who helped her with the constant care that Kim needed. But in the past year, Kim’s disease progressed, and her cognitive skills regressed. She used to enjoy going shopping with her family, getting her nails done, and playing games. But her medical condition took a toll on her.

In January 2022, Kim seized for 20 hours. After that hospitalization, she stopped walking and became 100 percent dependent on her wheelchair. She also was experiencing shoulder pain. In early May, she had another seizure. When she went to the hospital, the family sensed that this hospitalization was different.

The discussions with the hospital staff led to Kim’s family making the decision to admit Kim into hospice care. “We decided we did not want Kim in pain any longer,” Teressa said. “On May 12, Kim was transferred to the Hospice House.”

Kim’s sister, Kelly, praised Kim’s care team at the Hospice House. “The care team members are angels on Earth,” she said. “You can tell that the nurses care so much for Kim.”

The family appreciated the peaceful and calming atmosphere that the Hospice House provided when they visited. Kim’s nephew, Evan Raleigh, 10, spent time with her, reading her some of her favorite Christmas books. Another nephew, Colin Maroney, and niece, Madeline Maroney, also visited with Kim.

Kim also loved listening to a recording of Christmas books read by Steve Morse, Teressa’s husband who died a few years ago. Before he died, Steve and Teressa recorded him reading the books so Kim could hear his voice.

Kim passed away on May 29. “I lost my sweet Kim on May 29th, our little snowmaker,” Teressa said. “Kim was an example how to live a life of happiness. She was a joy to all who knew her. Kindness is her legacy.”

More than 200 people attended Kim’s funeral, which had a Christmas theme. Kim’s family set up 14 Christmas trees, all with white lights. Some were small trees, while others were large trees. Her Christmas stocking was displayed along with 50 photos of Kim and a looping video with more than 300 photos. Christmas music played in the background during the gathering.

At her funeral, Kim’s sister, Kelly, talked about Kim’s love of Christmas. “Kim made Christmas magic for us,” she said. “And so, today, as we celebrate everything about Kim, please know that I am sure she is up in Heaven right now, looking down on us, laughing and smiling, knowing that she’s making it snow for each of us one more time.”

The family used the snow machine again and made it snow at her funeral service.

In lieu of flowers, the family requested toys for children. They received more than 300 toys that will be donated to a children’s hospital and other nonprofit organizations that support children. The family also donated the snow machine to Ohio’s Hospice. They are hoping someone else loves snow just as much as Kim did!