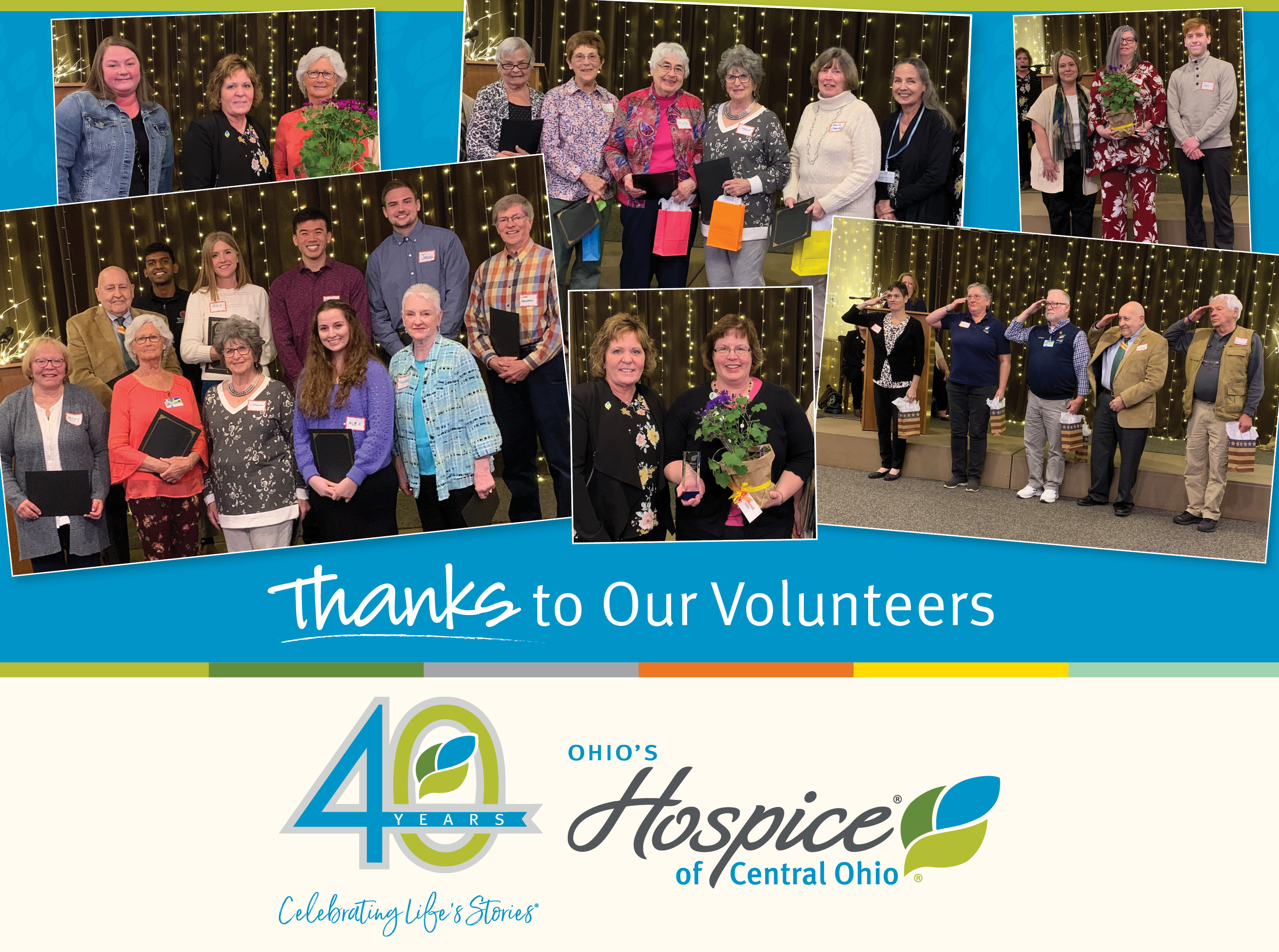 As part of National Volunteer Month in April, Ohio’s Hospice of Central Ohio honored its dedicated volunteers at a Volunteer Appreciation Open House on April 28 at The Grove by The River in Newark, Ohio.

“Volunteers are an essential part of the mission of Ohio’s Hospice of Central Ohio. Our mission is to celebrate the lives of those we have the privilege of serving by providing superior care and superior services to each patient and family,” said Liz Adamshick, manager of Volunteer Services at Ohio’s Hospice of Central Ohio. “We’re grateful for our amazing volunteers. They make a difference in the lives of the patients and families we are honored and privileged to serve.”

Founded in 1982 by volunteers, Ohio’s Hospice of Central Ohio is celebrating its 40th anniversary this year. Volunteers have been involved in all aspects the not-for-profit hospice’s mission.

“Visiting with patients, delivering supplies, assisting with office duties, and creating handmade items of comfort and support for patients and their families are just a few ways volunteers donate their time,” Adamshick said. “In addition, several of our volunteers are part of the American Pride® Veteran Care by Ohio’s Hospice program. These Veteran volunteers honor our Veteran patients by celebrating and thanking them for their service.”

Volunteers achieving milestone years of service honors were thanked for their time and skills:

The evening culminated in the presentation of the organization’s Selma Markowitz Lifetime Achievement Award. This award is given for lifetime service to one active volunteer who has demonstrated commitment over time to the organization’s mission and who has made a positive impact on that mission as well the organization’s growth. Joe Machado of Baltimore, Ohio, was this year’s recipient. He was nominated by Ruth Robson, social worker coordinator, for his extensive involvement in the Ohio’s Hospice of Central Ohio American Pride® Veteran Care by Ohio’s Hospice program, supporting Veterans at the end of life.

Special thanks to the event sponsors, which included Park National Bank, lead sponsor, and Granville Investment Group, champion sponsor. Gifts for the award recipients were donated by Groovy Plants Ranch. The event was catered by Doug’s Far Side Catering.

To learn more about volunteering with Ohio’s Hospice of Central Ohio, please visit: www.HospiceofCentralOhio.org/Volunteers/ or call 740.788.1404.

Ohio’s Hospice of Central Ohio, an affiliate of Ohio’s Hospice, has provided a holistic, community-based approach to hospice care since 1982. With locations in Newark, Columbus, Lancaster and Zanesville, the not-for-profit organization serves nine counties in central Ohio and is dedicated to supporting the physical, emotional and spiritual needs of patients and families facing life-limiting illnesses. In addition, two inpatient care centers at Licking Memorial Hospital and The Ohio State University Wexner Medical Center are available for symptom management.