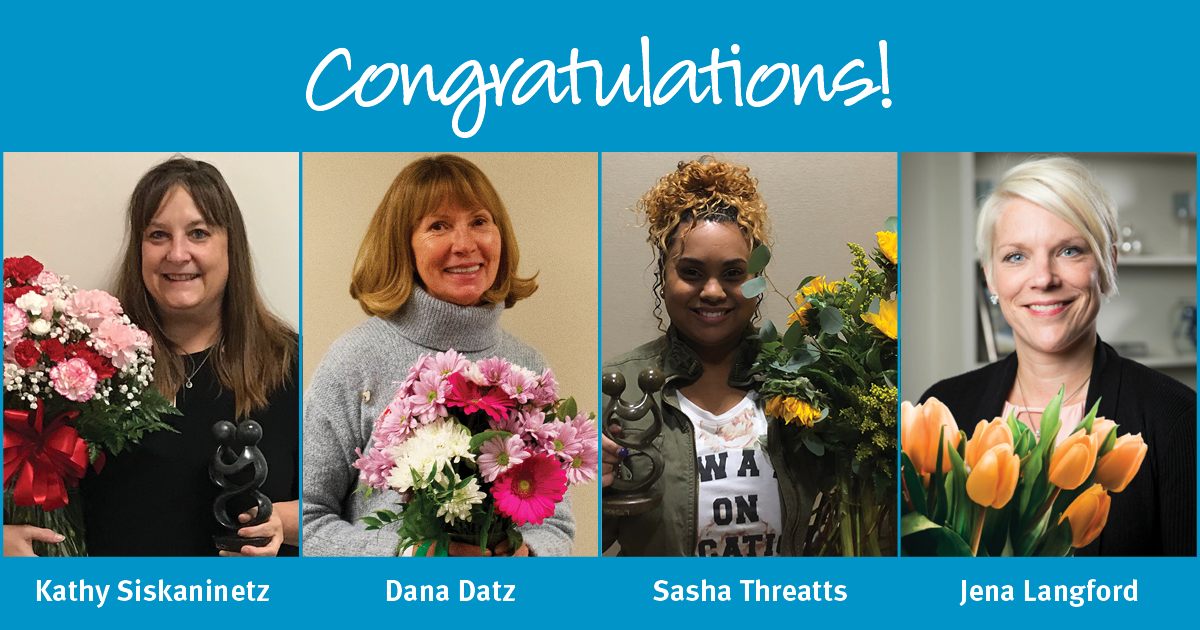 Outstanding members of the Ohio’s Hospice staff are recognized each quarter with Bouquet of Recognition Awards. Honorees personify the qualities found in the mission and vision of Ohio’s Hospice and are the foundation upon which a remarkable patient experience is built. These staff members consistently demonstrate excellence through their expertise and extraordinary compassionate support for patients and families. They are recognized as outstanding role models in the Ohio’s Hospice community. These are the recipients for the fourth quarter of 2019.

“I have been a guest at many of her hosted events, and she is always warm and inviting,” Adelle wrote in the nomination form. “She makes everyone feel special.”

Congratulations to Kathy on being recognized with the Carnation Award and thanks to her for her dedication to the mission of Ohio’s Hospice.

Dana Datz, RN Hospice House/Inpatient Care with Ohio’s Hospice of Butler & Warren Counties, was recognized with the DAISY Award®, for providing outstanding compassionate care to a patient and the patient’s family.

Ohio’s Hospice is proud to be a DAISY Award partner, recognizing one of its nurses with this special honor, quarterly. At Ohio’s Hospice, DAISY Award honorees are nurses who consistently demonstrate excellence through their clinical expertise and extraordinary compassionate care. They are recognized as outstanding role models in the Ohio’s Hospice nursing community.

The patient’s son nominated Dana. He was touched by the concern Dana had for him when she met him. He had been up for 36 hours at the hospital with his father before hospice was called. “This small act meant the world to me, and I knew at that exact moment that Dad had come to the right place,” the patient’s son wrote in a nomination form. “I really wish I could quantify how much that meant to me. Through the remainder of the day, small acts of service seemed to be the priority — combing his hair each time he was turned, actively ensuring he was clean at all times, ensuring Dad had each activity explained to him as if he were awake and able to make decisions, and briefly placing her hand on his chest after tucking his sheets in as one last comforting gesture.”

Congratulations to Dana on being recognized with the DAISY Award and thanks to her for her support of the Ohio’s Hospice mission.

The patient’s daughter appreciated the time Sasha took with her mother to give her complete baths, including fixing her hair. “She was very compassionate and caring toward my mother,” the patient wrote in the nomination form. “She listened to my mother’s stories and shared some of her own.”

Sasha’s colleague, Cathy Gipson, who also is a personal care specialist with Ohio’s Hospice of Dayton, praised Sasha for helping her teammates in addition to her compassionate care for patients. “Sasha is great with communicating when there is a need or passing along information to other team members,” Cathy said. “She a wonderful person to work with, and her patients adore her! Our patients and their family members sing her praises.”

Congratulations to Sasha on being recognized with the Sunflower Award and thanks to her for her support of the mission of Ohio’s Hospice.

Jena Langford, team leader Hospice House/IPU with Ohio’s Hospice of Dayton, was recognized with the Tulip Award for her leadership and hard work.

Milli Jefferson, excellence educator with Ohio’s Hospice, nominated Jena for the award. “Jena is a true example of the Bouquet of Recognition,” Milli wrote in the nomination form. “She started as a personal care specialist, then became an LPN, and then an RN. At each level, she has excelled.”

Now in a leadership role, Jena leads by example with hard work. Her commitment to her team is commendable. In addition, Jena leads the Nursing Honor Guard, which honors nurses who are in hospice care with Ohio’s Hospice. “She goes above and beyond to ensure all nurses are honored at the end of their lives,” Milli said. “Thank you, Jena, for leading by example with a smile.”

Congratulations to Jena on being recognized with the Tulip Award and thanks to her for her support of the mission of Ohio’s Hospice.